Hunting for continuous emission of gravitational waves from neutron stars

A pulsar (pink) can be seen at the center of the galaxy Messier 82 in this multi-wavelength portrait. The pulsar was discovered by NASA’s NuSTAR which detected the pulsar’s X-ray emission. (Image credit: NASA/JPL-Caltech)

While Virgo and LIGO have been undergoing upgrades, the data from the early part of the third observing run of the detectors (from April to September, 2019), have been analysed by researchers to look for signs of continuous emission of gravitational waves from rapidly spinning neutron stars. This makes it possible to set new, clear constraints for future searches.

Theory has it that, as they rotate, neutron stars emit continuous gravitational waves, because of asymmetries in the mass distribution around the rotation axis. The asymmetries may be due, for instance, to misalignments between their symmetry and rotation axes or to imperfections, sort of ‘mountains’, in the outer crust. Through the analysis of these gravitational-wave signals, scientists can probe and study the inner structure and composition of these extremely intriguing astrophysical objects.

Researchers of the LIGO and Virgo collaborations have looked for these continuous emission signals, focusing on those emitted from neutron stars in binary systems. Due to the movement and rotation of the Earth, this wave would appear with a characteristic frequency modulation, further characterised by the binary nature of the system. After integrating the data stream over the six-month period, no evidence of this signature modulation has been found. However, researchers have determined the maximum distance from the Earth that the search was able to probe and the maximum deformation allowed for a neutron star within this range, setting a clear constraint for future analysis. The results were released on the 25th of December on arXiv.org. 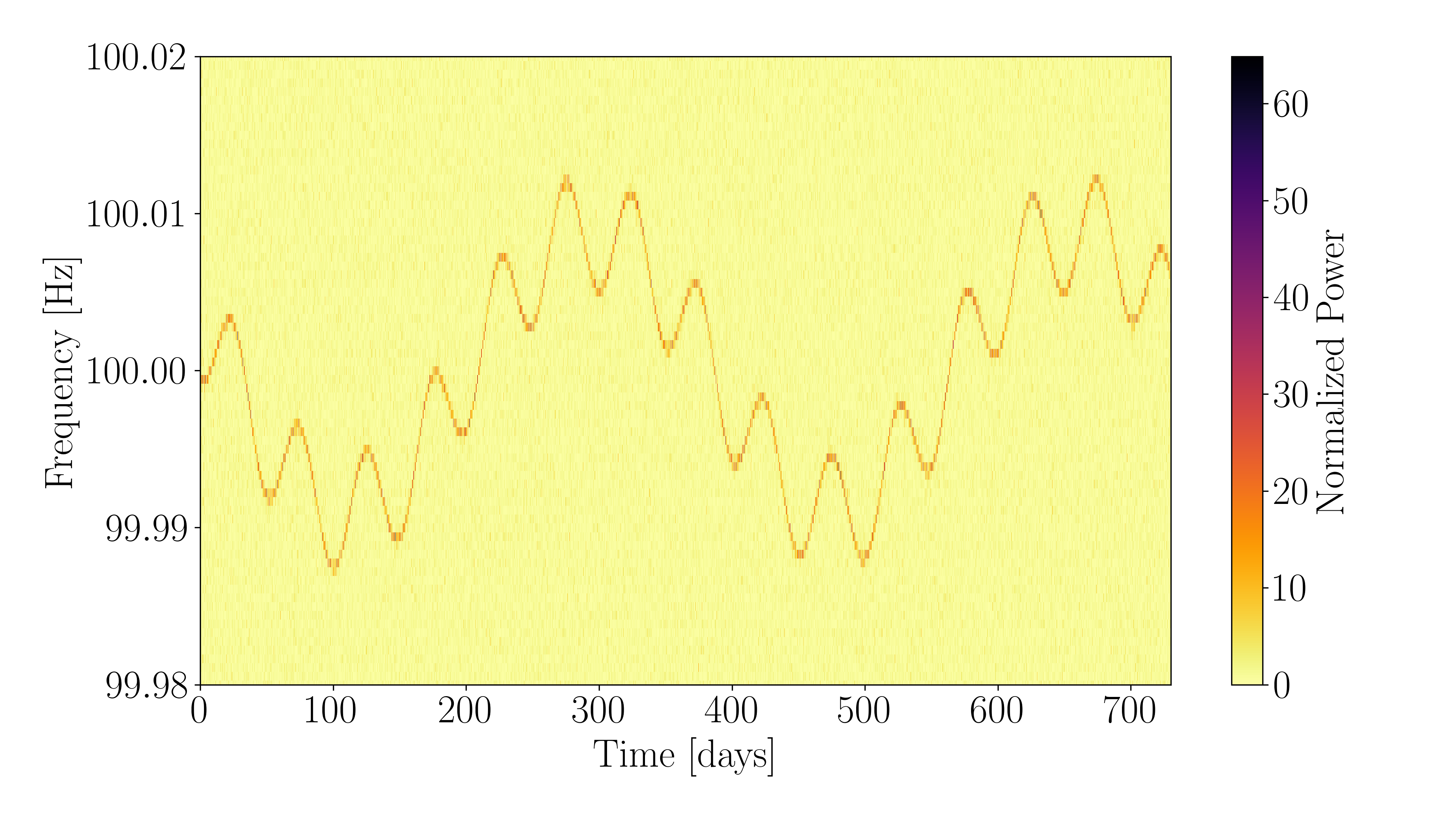 The spectrogram shows the simulation of the signal emitted by a deformed neutron stars spinning 50 times per second and orbiting a companion with an orbital period of 50 days. The overall frequency scale, 100 Hz, is given by twice the rotational frequency of the body. The widest oscillations, with periodicity of 365 days, correspond to the doppler modulation induced by the orbital motion of the Earth around the sun. The narrower ones, with a periodicity of 50 days, correspond to the orbital motion of the neutron star around its companion.

Another study, released on the same day, focuses on a particular pulsar (a rapidly rotating neutron star), known as PSR J0537-6910, located in the Large Magellanic Cloud, a “satellite” galaxy of our Milky Way. While this pulsar spins, it loses energy, as all pulsars do, but this one is special because it is both the fastest spinning young pulsar we know of and the one with the largest rate of energy loss. If all of this lost energy was light, it would be about 100,000 times the luminosity of the Sun. Actually some of the energy could be lost as gravitational waves, and, if so, how much of it?

This is what the LIGO, Virgo and KAGRA Collaborations, in conjunction with NICER (Neutron star Interior Composition Explorer, a telescope installed on the International Space Station) have set out to investigate, by looking for continuous gravitational-wave emission from PSR J0537-6910. Also in this case, no evidence of this emission was found, but once again this allows us to gain new information: less than around 14% of the star’s spin-down luminosity is going into gravitational-wave production. The remaining energy has to be emitted through other mechanisms: for example X-ray and Gamma ray emissions or through the acceleration of charged particles, to create the so-called pulsar wind nebula.

Science Summaries of the papers: