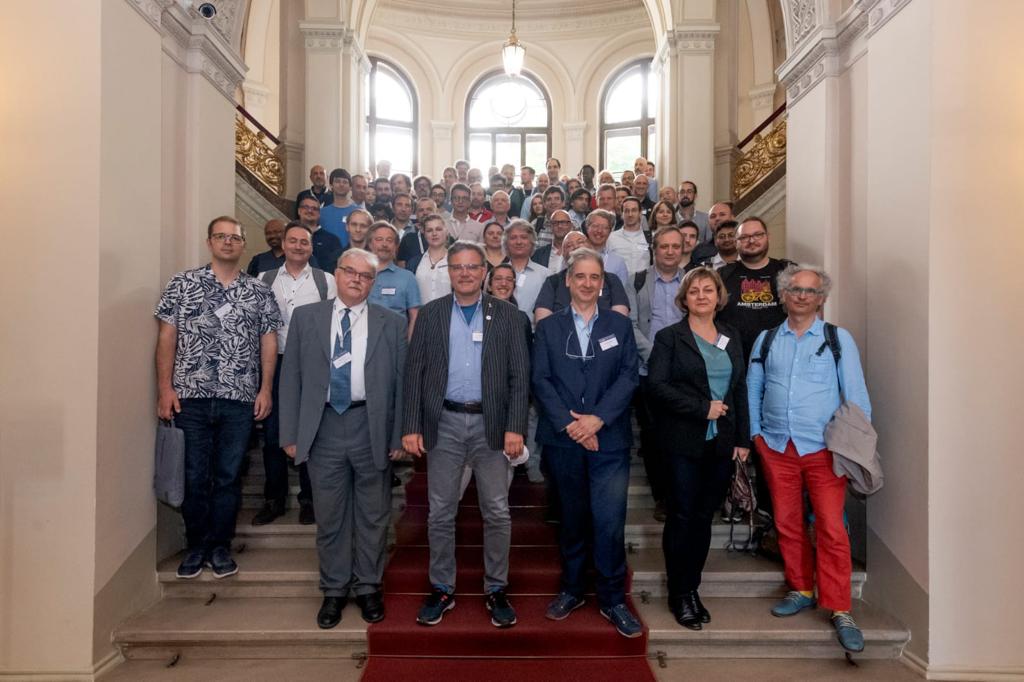 The community working on the ET Einstein Telescope project to build Europe’s future gravitational wave observatory formally stated the birth of the Einstein Telescope Scientific Collaboration at the 12th ET Symposium held at the Hungarian Academy of Sciences in Budapest on the 7th and 8th of June.

“The 12th Einstein Telescope Symposium that has just ended represents a crucial step in the project’s journey because it marks the birth of the full-fledged ET Science Collaboration,” comments Michele Punturo, INFN researcher who has been leading the ET community until now and will now serve as the collaboration’s spokesperson. “We were a scientific community, today we are a scientific collaboration, that is, a structured and organized system that works following shared rules to achieve the common goal: the realization of Einstein Telescope, a large European research infrastructure that will bring us to the center of world science and allow us to maintain scientific and technological leadership in this promising field of fundamental physics research. This is therefore a moment of great satisfaction and motivation for all of us,” Punturo concludes.

“Today is a historic moment for ET because it enshrines the birth of the Scientific Collaboration of what will be an extraordinary tool for science and knowledge: ET will allow us to trace back, through gravitational waves, to the first structures of the universe,” explains Marica Branchesi, GSSI and INFN researcher, coordinator of the Observational Science Board (OSB) . “In the Collaboration we already have an Observational Science Board with more than four hundred people who are working on different scientific topics, from fundamental physics to nuclear physics, from astrophysics to astroparticle physics, to cosmology. ET will be truly revolutionary for our understanding of the universe throughout its cosmic history,” Branchesi concluded.

“These are exciting times, proving that the pioneering GW detections by LIGO and Virgo started a scientific revolution, ushering ‘the GW and Multimessenger era’, that has a bright future,” said the director of the European Gravitational Observatory, Stavros Katsanevas. “The LVK network is currently upgrading its sensitivity towards a multiplication of the GW event detections by one order of magnitude and more and it is encouraging that this effort will have a continuation deep into the century, with the 3rd Generation detector Einstein Telescope. ET will probe the GW Universe to the dawn of the star and galaxy formation and even beyond. The engineering and scientific teams of the European Gravitational Observatory” – concluded the EGO Driector -“although currently working intensively on the upgrades of Virgo, are very happy to have contributed with their expertise and will continue to contribute in the future to this exciting adventure.”

The event was attended, in person and remotely, by 438 scientists from 28 countries, who discussed the technological challenges that will have to be met to get to the construction of the major new research infrastructure, and the scientific and technical progress made in recent months by each ET working group.
The project leadership, represented by Dutch physicist Jo van den Brand of Nikhef and Italian physicist Fernando Ferroni of GSSI and INFN, presented the perspective of the scientific institutions that are supporting ET.
The INFRA-DEV Horizon EU project, approved to support the experiment preparation phase, and the INFRA-TECH Horizon EU proposal, recently submitted to Brussels to support R&D activities, were also presented to the entire collaboration.
During the Symposium, the ET Collaboration Council was formed, chaired by German physicist Harald Lueck of the Max Planck Institute and composed of representatives from each of the 77 research units. During the Council’s first meeting, the Collaboration also discussed the new Einstein Telescope charter that will govern the future of the experiment, and initiated procedures to establish the committees necessary for the technical and organizational functioning of the collaboration.
With the birth of the ET Collaboration, the symposium thus lays a milestone in the long journey of Einstein Telescope.