The most massive black hole ever detected with gravitational waves

Virgo and LIGO have announced the detection of an extraordinarily massive merging binary system: two black holes of 66 and 85 solar masses, which generated a final black hole of around 142 solar masses. The remnant black hole is the most massive ever detected with gravitational waves. It lies in a range of mass (from 100 to 1000 solar masses) within which a black hole has never before been observed, either via gravitational waves or electromagnetic observations, and may help to explain the formation of supermassive black holes. Moreover, the most massive component of the binary system lies in a mass range forbidden by stellar evolution theory and challenges our understanding of the final stages of massive stars life.

The gravitational-wave event was detected by the three interferometers of the global network on the 21st of May, 2019. The signal (named GW190521) has been analysed by scientists and two scientific papers reporting the discovery and its astrophysical implications have been published today on Physical Review Letters and Astrophysical Journal Letters respectively.

“The signal observed on May 21 of the past year is a very complex one and, since the detected system is so massive, we only observed it for a short time: about 0.1 s”, says Nelson Christensen, directeur de recherche CNRS at ARTEMIS in Nice, France and member of the Virgo Collaboration. “This doesn’t look much like a chirp, which is what we typically detect: it is more like something that goes ‘bang’ and the system that generated it is the most massive that LIGO and Virgo have detected until now.” Indeed, the analysis of the signal, based on a powerful suite of state-of-the-art computational and modelling tools, revealed a large amount of information about the different stages of this unique merger.

A crucial aspect, which particularly drew the attention of astrophysicists, is that the remnant belongs to the class of so-called ‘intermediate-mass black holes’ (from a hundred up to a hundred thousand solar masses). The interest in this black-hole population is linked to one of the most fascinating and challenging puzzles for astrophysicists and cosmologists: the origin of supermassive black holes. These giant monsters, millions to billions of times heavier than the sun and often at the centre of galaxies, may arise from the merger of ‘smaller’ intermediate-mass black holes.

The components and the dynamics of the merging binary system of GW190521 offer also other extraordinary astrophysical insights. In particular, the most massive component challenges the models describing the collapse of the heaviest stars, at the end of their lives, into black holes. According to these models, the very massive stars are completely disrupted by the supernova explosion, due to a process called pair instability, and leave behind only gas and cosmic dust. Therefore, astrophysicists would not expect to observe any black hole in the mass range between about 60 and 120 solar masses: exactly the range of mass in which the most massive component of GW190521 lies. Hence, this detection opens new perspectives on the study of massive stars and supernova mechanisms.

In fact, the Virgo and LIGO GW190521 detection highlights the existence of black-hole populations that have never been observed before or are unexpected and, in so doing, raises intriguing new questions about their formation mechanisms.

“The observations made by Virgo and LIGO are shedding light on the dark universe and defining a new cosmic landscape”, states Giovanni Losurdo, Virgo spokesperson and head of research at Istituto Nazionale di Fisica Nucleare in Italy  “And today, once again, we announce an unprecedented discovery. We keep improving our detectors to enhance their performance and look further and further into the Universe.” 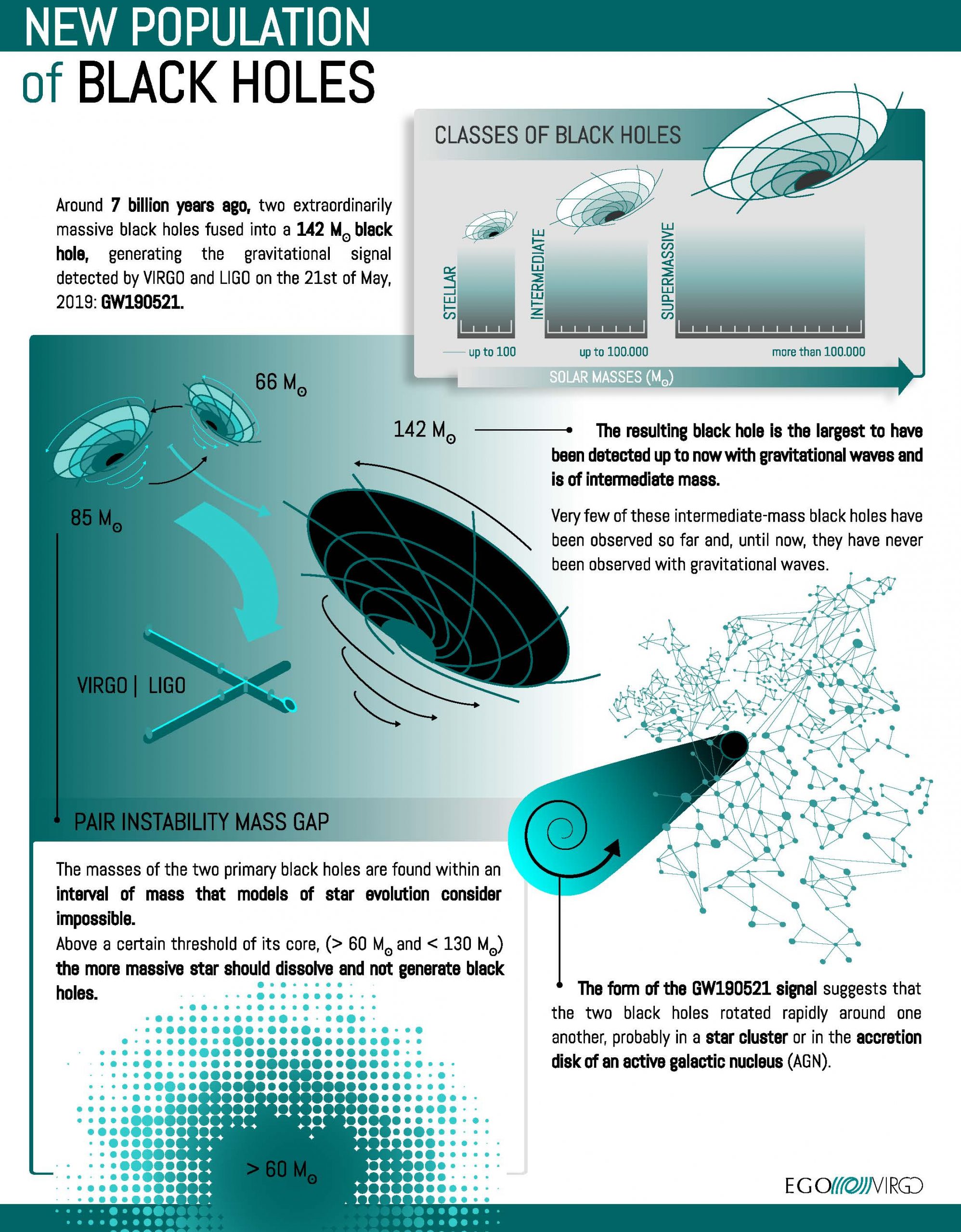