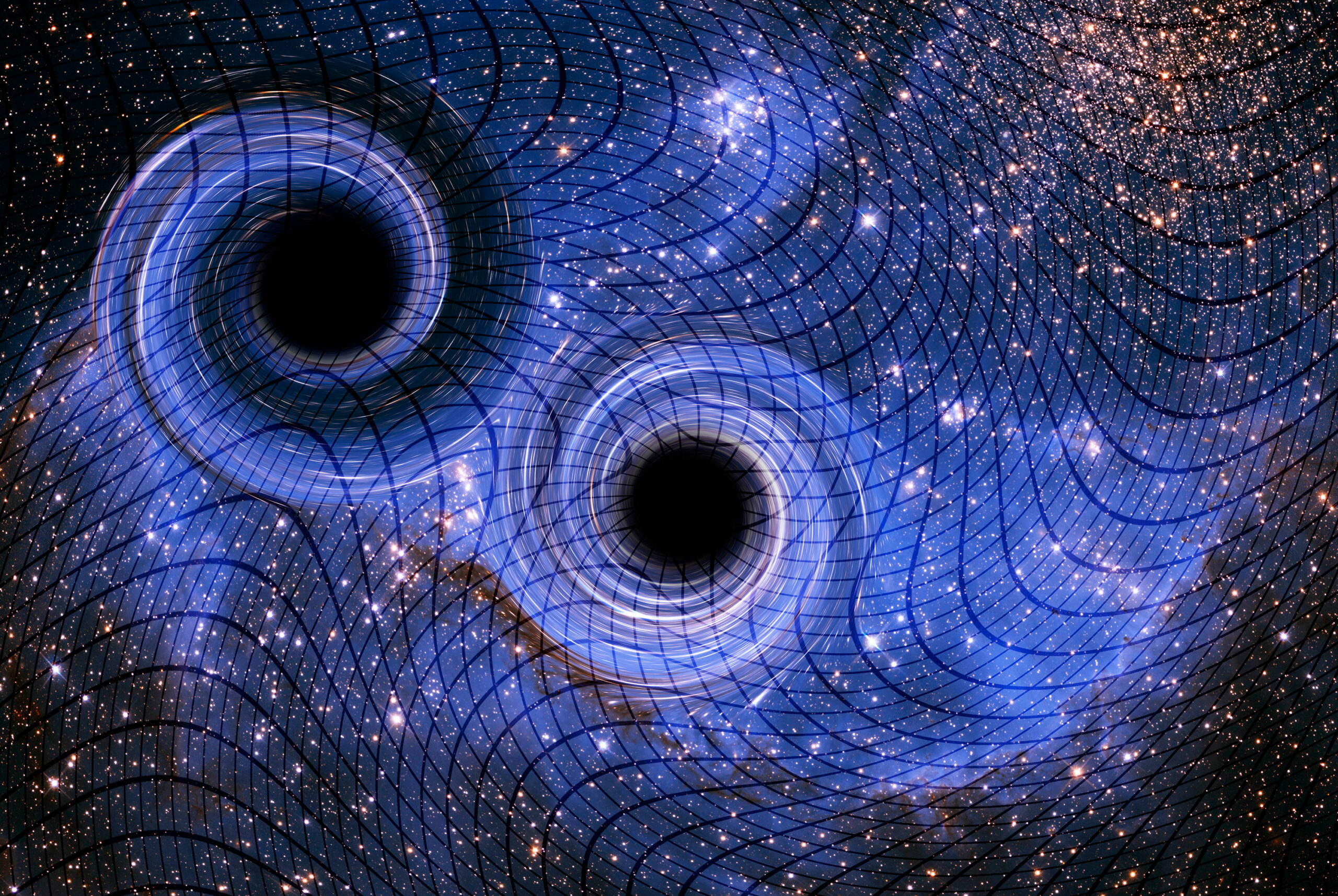 35 new events detected by LIGO and Virgo in their latest observation period bring to 90 the gravitational waves detected so far. These events are spacetime quakes generated by the mergers of either two black holes or neutron stars, or black hole-neutron star pairs. The dataset, published today in the so-called third Catalog Paper, outlines the features of new populations of black holes, the masses of which, together with those of the observed neutron stars, provide clues about how stars live and die, further broadening the horizons of gravitational astronomy.

Data from 35 new gravitational-wave events observed between November, 2019, and March, 2020, during the second part of the third and most recent LIGO-Virgo observation period (O3b), bring to 90 the total number of gravitational signals detected to date by the global three-interferometer network.
Most of the new signals originate from the whirling spiral of two merging black holes: cosmic quakes that shake the fabric of spacetime, generating a powerful burst of gravitational waves. Two other events, one already reported last June, were instead identified as mergers between a neutron star and a black hole, a source observed for the first time in this last LIGO-Virgo run. A further event, detected in February, 2020, could come from either a pair of black holes or from a mixed pair of a black hole with a neutron star. Indeed, the mass of the lighter object falls within a range – the so-called mass gap – in which, prior to gravitational-wave observations, neither neutron stars nor black holes were expected to form, and which remains a puzzle for scientists.
These new detections were published today by the Virgo, LIGO and KAGRA scientific collaborations, in the third catalog of gravitational-wave transient sources (GWTC-3), on the ArXive online archive. The Catalog is accompanied by two other publications, focusing on the cosmological and astrophysical consequences of the results.

As soon as a signal is recognized as a potential astrophysical event by the detector data-analysis system, and double checked by researchers, some preliminary information about the localization in the sky of the gravitational-wave source and its nature (i.e. pair of black-holes, pair of neutron stars or mixed pair) is made public, almost in real time. These ‘low-latency alerts’ allow for multi-messenger follow-up, that is the search by telescopes and observatories on Earth or in space, for signals of different types (e.g electromagnetic signals and neutrinos) emitted by the same source as that which emitted the gravitational waves.
During the last observation period, the LIGO and Virgo collaborations issued 39 real-time alerts to the scientific community for potential gravitational-wave events. 18 of these candidates have been confirmed and 17 more events have been added by further offline analysis. The results of these, more complete and refined, analyses are the ones published today in the GWTC-3 Catalog. However, no confident multi-messenger counterparts have thus far been reported.

“The offline analysis of the data continued for many months after the observation period ended, as it required a long and complex work of data calibration and analysis by different research teams, working in parallel and using different analysis techniques”, says Viola Sordini, CNRS researcher, at Institut de Physique des deux Infinis de Lyon. “Indeed, in some cases we look for signals in the data that resemble as closely as possible the ‘shapes’ predicted by the theoretical models. Other groups instead consider and analyse in detail all the signal features, which emerge from the noise background of the detector, without any reference waveform. It is an extremely intense activity, in which hundreds of researchers from all over the world coordinate.”
At the same time, the LIGO, Virgo and KAGRA scientific collaborations have today also released the full set of calibrated data recorded by the LIGO and Virgo detectors from November, 2019, to March, 2020. This allows the whole research community to perform independent analyses and checks, maximising the wealth of scientific results.

The new horizon of gravitational astronomy

The Catalog, and the companion papers published today, offer an unprecedented view of a new landscape of extreme cosmic events and outline the characteristics of populations of black holes, setting new records and limits on the masses of black holes and neutron stars.
Several of the black holes formed from these mergers exceed 100 times the mass of our Sun, and are classified as intermediate-mass black holes. This type of black hole is of great interest, as it may play a key role in the formation of the supermassive black holes found at the centre of galaxies. These have long been theorised about by astrophysicists, and have been directly detected for the first time with the LVK gravitational-wave signals.
Furthermore, one of the mergers involves a massive black hole (about 33 times the mass of our Sun) with a very low-mass neutron star (about 1.2 times the mass of our Sun). This is one of the lowest-mass neutron stars ever detected, using either gravitational waves or electromagnetic observations.

Finally, there is a binary system for which scientists cannot define with certainty whether the lightest component is a neutron star or a black hole. Its mass, equal to 2.8 solar masses, is puzzling, as scientists expect that the most massive neutron star must be around 2.5 times the mass of our Sun. However, no black holes with a mass below about 5 solar masses have been discovered with electromagnetic observations.
In general, the distribution of masses of black holes and neutron stars observed, challenges the astrophysical models that describe the evolution and death of stars, from which they originate. Moreover, the physical properties of the detected sources offer new clues about the astrophysical environments in which the extreme cosmic events under study are most likely to occur: dense stellar environments, such as globular clusters, young clusters or even the accretion disks of active galactic nuclei.

“I still vividly remember the enthusiasm of all us scientists as we listened to the public announcement of the first discovery of gravitational waves in early 2016”, said Edoardo Milotti, member of the Virgo Collaboration at the University of Trieste and INFN. “Now, less than six years later, the discoveries reported in the GWTC-3 catalog add new precious information to the new, growing field of gravitational-wave astronomy, and provide a new perspective on many facets of the Universe, like, for example, the populations of binaries of black holes or neutron stars.”

Thanks to the data from this last observation period, LIGO, Virgo and KAGRA researchers have also been able to use the gravitational-wave signals to further increase the precision of the measurement of the Hubble constant (i.e. the expansion rate of the Universe). This is an alternative to the estimates based only on electromagnetic signals or on the cosmic microwave background. The most direct method, which requires gravitational-wave events with an electromagnetic counterpart, was not possible, as no electromagnetic signals were detected in association with the gravitational waves. But the large number of signals observed allowed us to use a statistical approach to estimate the expansion rate anyway.

The progress achieved in a few years by gravitational-wave scientists has been amazing, passing from the first detection to the observation of a number of events per month. This has been possible thanks to the programme of continuous technological upgrades, which have transformed the first pioneering instruments into increasingly sensitive detectors. The progress in detector sensitivity due to the technological upgrades and commissioning is evident, considering that, of the 90 gravitational-wave events published today, as many as 79 refer exclusively to the most recent observation period, which ran from April, 2019, to March, 2020.

The LIGO and Virgo observatories are currently undergoing a further upgrade and will start the upcoming fourth observing period, in the second half of 2022, with an even greater sensitivity, corresponding to a volume of the Universe almost 10 times larger than before and, therefore, a much greater probability of picking up gravitational signals.
“Among the other upgrades at Virgo, we have realised an additional optical cavity (the so-called signal-recycling cavity), which allows to improve the sensitivity band of the detector at high frequencies”, said Sebastian Steinlechner, assistant professor at Maastricht University and Nikhef. “This corresponds to an increased capacity of the detector to ‘listen’ to the final stages of the coalescing pairs, when two black holes or stars merge into one.”

The KAGRA detector in Japan is being commissioned and KAGRA plans to join the next observing period. The expansion of the network of detectors able to jointly take data will further increase the accuracy of source localisation, a key feature for future developments in multi-messenger astronomy.

“The new papers show how Virgo, LIGO and KAGRA are moving fast into a new phase”, says Giovanni Losurdo, Virgo spokesperson and INFN researcher. “From the discovery and the observation of isolated events to population studies, a powerful way to investigate the nature of the dark universe. This change will appear even more relevant in the next